The days and nights are only just cooling down after the Summer that slipped in early and hung about well into the Autumn months. People's comments have mostly been labelled as the "Summer from Hell" unless you huddle indoors with the air-con working almost non-stop. I imagine there is just too much hot air about with all these disorderly events. People have been traumatised sadly terrorists or by election candidates incessantly stirring the pot. Ice cubes might help but be prepared for an increase in your next water rates bill. 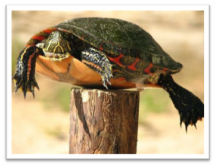 An Aussie farmer's outlook & common sense approach to life
​
​While suturing a cut on the hand of a 75 year old Aussie farmer, who's hand was caught in the gate while
working cattle, the doctor struck up a conversation with the old man.
Eventually the topic got around to Julia Gillard and her role as our Prime Minister.
The old farmer said, 'Well, ya know, in my opinion, Gillard is a 'Post Turtle''…
Not being familiar with the term, the doctor asked him, what a 'post turtle' was the old farmer said, 'When you're driving down a country road and you come across a fence post with a turtle balanced on top, that's a 'post turtle'.
The old farmer saw the puzzled look on the doctor's face so he continued to explain. 'You know she didn't get up there by herself, she doesn't belong up there, she doesn't know what to do while she's up there, and you just wonder what kind of dumb bugger put her up there to begin with.
​
Cry For The Moon

SARAH LYNCH was a single parent. Her husband had lost his life during a yachting race before the children were old enough to know their father all that well. When her two children were younger and living at home, they often visited garage sales. It was while driving past a garage sale, that thoughts were triggered in her mind of just how to improve situations she had become so used to.
For the past eleven years, she maintained a happy household just the way the children’s father would have wanted, but today she decided she wanted more.
‘Why not make that change’, thought Sarah, anyone can change she imagined. ‘After all, I have been a child, an adult, a wife and then became a mother-- and awkwardly played the role of father when it was necessary’.

Some weeks later, she had an appointment to see Doctor Fletcher, her plastic surgeon who had performed major cosmetic surgery. It had been six weeks since the operation, so it was only a check-up today. This was the beginning of some changes that she felt were well overdue.

Sarah was pleased with what her doctor had said and gave a long sigh of relief when driving out the hospital gateway. She was heading for the city when noticing a sign with an arrow pointing to a garage sale. She parked the car and joined others in search of hidden treasure, then spotted an outstandingly handsome man browsing at a stack of books.

‘They don’t make them like that any more do they?’ she said from the opposite side of the table. And when his eyes focused on her and he smiled, she could feel waves of emotion reflect between them.
‘Are you...?’ he asked hesitantly.
‘Me... oh no... I am not a collector, merely curious and decided to stop for a browse while on my way to the city ‘.

‘What a coincidence,’ said Michael, ‘I am headed that way myself. Why don’t we meet there in an hour’s time at that Absolutely fabulous restaurant on Chevron Island’, he said, offering the best smile that Sarah had seen in over a decade.

That was the day Sarah and Michael became friends. Whatever they did together was unique, special. They were honest and open about everything, everything but Sarah’s face lift, which no-one was to know about anyway. The only person who she shared that with was her doctor.

No-one knew that the skin on her forehead was stretched up to her hair line and tacked in place, with two tiny screws each side of the forehead. Or that she stayed in seclusion at a health clinic in Port Douglas to allow for any incision marks from the operation to fade.

Michael and Sarah enjoyed being together, even enjoyed occasional visits to a garage sale on weekends. When they weren’t driving in the car, they could be sailing across the harbour or just avoiding anything that seemed part of a once normal routine. Sometimes they took a mystery flight to one of the islands for the weekend. Michael always said he felt that some places bubbled with excitement, which is where you would be certain to find them both.

She was astounded by the way her outlook had changed-- since now a new Sarah emerged. She felt and looked younger, had changed her diet, her hairstyle, her choice of cars and even the house was on the market. She had been gazing in the bathroom mirror, reflecting on mental images of the past when the telephone buzzed impatiently.

‘Hi Sarah, it’s Michael here... You’ll never believe this but I have just collected money on a Trifecta and had to buy a bag just to carry the winnings home. Anyway, how about I pick you up for a celebration drink tonight? It won’t be a late one since I have an appointment early in the morning’.
‘As long as it’s not too late, I have an early appointment too’, she said.

When they drained a second bottle of champagne at Michael’s, they made a final toast to their success and dived in to the indoor pool, an exercise which he guaranteed to clear a fuzzy head. Sarah enjoyed being with Michael but was noticeably conscious of the time, making sure to be home before 11.30 that night.

Next morning she left home early so she would be on time for her final appointment with the plastic surgeon. When she arrived she spoke to his secretary who said that there was a patient in with the doctor but she wouldn’t have too long to wait. She took a seat and was flicking through a magazine when the door to the consultation room opened.

A familiar male voice besides the doctor’s could be heard:
‘Thank you again for all your help doctor Fletcher’, said the male patient. He was passing Sarah when she put her magazine down and stood up.
‘Michael...?!’ she exclaimed.
‘Sarah...?’ he sheepishly replied