JSMedia - Downunder
Most Of Us Know Australia As The Land Down Under.

​It was May 13 when the First Fleet of 11 ships and 1530 people (736 convicts, 17 convicts' children, 211 marines with 27 marines' wives plus 14 marines' children, 300 officers plus) under command of Captain Arthur Phillip set sail for Botany Bay. With a change of plans a few days after anchoring in Botany Bay they raised anchor and sailed north towards Port Jackson. A settlement was established in Sydney Cove on January 26th 1788.

People from all over the world have made Australia their home. Their lives and experiences have influenced all aspects of Australian life. In particular, new arrivals and immigrants, have contributed significantly to the working life of Australia – from goldfields, the Overland Telegraph, the sugar cane fields, vineyards and construction sites through farms and pearling luggers to factories, fashion, cafes and other businesses.

Docklands of Sydney, Melbourne and Fremantle were the main arrival points for people arriving in the colonies from the early 1800s. Hobart and the port towns along the South Australian coast such as Robe, were also significant arrival points. Hobart was a main commercial shipping depot for the early maritime industries. Robe and neighbouring port towns along the Coorong peninsular in South Australia were popular places to disembark being the last ports before crossing a hazardous coastline known as the shipwreck coast.
The development of the port towns of the far north – Brisbane, Townsville and Cairns, from the mid-1800s owed much to the commercial shipping and trading companies, such as Howard Smith and Burns Philp.

Aborigines and Torres Strait Islanders experienced dislocation from British areas of settlement bringing disruption to their social and economic lives. Outside the key settlement areas however, Aboriginals and Torres Strait Islanders remained the dominant population group. Mutual relationships developed in trading skins, food and artefacts for cash, rum, gold, horses, tobacco, blankets, hats, boots and clothes. Across south-eastern Australia, some colonists learnt local Aboriginal languages― the vernacular in rural areas.
Aboriginals became skilled in station work, animal husbandry, midwifery, medicine, tracking, policing, fishing, navigating, droving, skinning and tanning to be in demand for the first 100 years of the colony. Gold rushes were an opportunity to gain employment on pastoral runs, engaging in trade especially skins, fishing and basket making, to becoming a part of the Native Police Corps. Miners relied on the Aboriginals to build mia mias or gunyahs (temporary shelters) as well as their experience of finding bush tucker.
From the 1860s, Afghans, Indians and Pacific Islanders were recruited to work in northern outback and rural Australia. Afghans came from India as well as Iran, Egypt and Turkey to be cameleers to operate camel trains throughout the Australian outback. They became regarded as pioneers of the inland. They were loosely referred to as Afghans largely because of their similar dress and common religious beliefs in Islam.
About 4000 Indians worked in the sugar and banana industries in Queensland in addition to the 6000 Pacific Islanders, referred to as Kanakas, who worked as contract labourers.
From the 1880s, Lebanese settlers arrived in Australia with Turkish papers, since Lebanon was part of the Turkish Empire until 1919. Many Lebanese were involved in textiles, drapery and haberdashery. Lebanese families came to own the majority of draperies in regional Australia – a tradition that has continued to recent time.

White Australia and limits to civil rights for non-Europeans.
At the opening of Federal Parliament, on 9 May 1901, the speech of the Attorney General Alfred Deakin (later Prime Minister) reflected the populist sentiment of some Australians when he opined on a vision of Australia as a nation that should remain one people, without the admixture of other races. The White Australia Policy came into law when The Immigration Restriction Act 1901 was passed in December, restricting immigrants from working in Australia and restricting migration of non-white people. These restrictions, were not uniform across Australia.
The social face of early Australia changed from one dominated by British settlers, Aborigines and Torres Strait Islanders. Chinese settlers had also become part of a significant minority of Australian society. They were the main suppliers of vegetables, tea, furniture, silk, tailoring and laundry services in the colonies and outnumbered the British on the Palmer River goldfields and in Darwin. The work of the Chinese, Afghans, Indians and Pacific Islanders, had dropped by over 50% and was replaced by southern Europeans from a federated Australia, following the enactment of the White Australia Policy in 1901 and their contributions came to be part of Australian social identity. 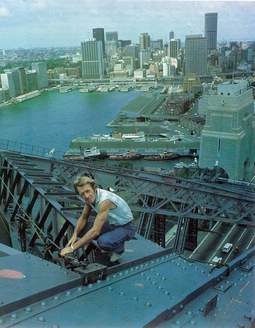 By Today's Standards.
Change is constant throughout our Land Down Under. It seems that the older and more populated Australia becomes, the faster change may occur. Not only are we still evolving, we're doing so even faster than before. For the past 10,000 years the pace of evolution has sped up 100 times, creating more mutations in our genes and more natural selection from those mutations.

Most people live for the here and now and don't always exercise much foresight. Such thinking has been found to be a waste and destruction of every civilisation that has come and gone.
There are some people that don’t care about others― Not because people are mean or hurtful, but simply because they are mainly focused on themselves. 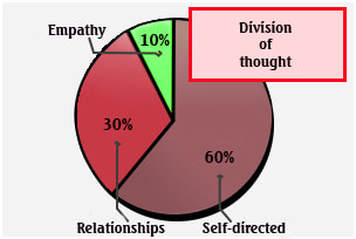 Consider this hypothetical pie-chart showing the variety of thoughts a typical person has.
​
Selfish altruism is basically a win/win situation where helping you directly or indirectly helps me. Here are four main categories where this applies:
​
Exchange For Payment – If I purchase a car, both myself and the dealer benefit. I get a vehicle, which I want. The dealer gets money to improve his lifestyle. This is the predominant form of selfish altruism between people who don’t have emotional bonds.

In The Family – Blood is thicker than water. We are designed to protect people who share our genes. This can sometimes shift towards extremely close friends and loved ones.

Status – Helping someone shows a suggestion of power. Many species of primates will offer assistance as a sign of dominance. People act in a similar way offering aid to boost their self-esteem and reputation.
​
The Norm of Reciprocity – Many relationships are based on the idea that if I help you then one day you will help me too.

A Twist To Respect and Dignity?
There’s been a lot of talk lately of finding work filled with purpose and passion. So many people are switching careers, moving from for profit into non-profit, reinventing themselves, becoming entrepreneurs, moving from career to full time motherhood and back into the workforce.

Why There Is A Spoilt Generation.
Parents who fail to exert authority are breeding youngsters who have little respect for anyone.
A growing lack of adult authority has bred a spoilt generation of children who believe grown-ups must earn their respect. Children of the spoilt generation are used to having their demands met by their parents and others in authority which in turn leaves them unprepared for the realities of adult life. This is being exacerbated by misguided attempts to give children more control over their lives.

Forgotten Boundaries Of A Child.
It's bad for children and it's bad for parents. Some parents due to a lack of time with pressures at work are trying to buy their children's love― which spells disaster.
They feel guilty for not being around as often so when their children ask for things they simply say yes to compensate.
Teenagers aged 15 to 19 are Australia's worst offenders. Figures from the Australian Institute of Criminology show violent crime is highest among this group.
Teenage offenders are responsible for a disturbing number of bashings, robberies, abductions and sexual assault.

Doesn't  Anyone Really Care That We Are Also Destroying The Land Down Under?
First off, many people do care. However, it is obvious a vast majority of people don't care enough about our Homeland.  As to why we don't care I believe there are endless reasons. Most people live in the here and now and often don't exercise foresight―  This way of thinking has been at the root of destruction for every civilisation which has been and gone.
We live in houses that are much larger than we need, drive more than we have to and are addicted consumers who use far more resources than is necessary for a good life. Our culture and our economy is infused with gross consumerism. Most people want the latest version of everything and we, for the most part, can afford to replace modestly used but still functional items with new ones.

Global Warming? So What?
A cow, on average, releases 70 to 120 kg of methane per year. Methane, a greenhouse gas, has a negative impact on the climate so that it warms things 86 times as much as CO2 does. Livestock uses 30 percent of Australia's entire land surface, and 33 percent of arable land is used to produce feed for livestock. How necessary is this? You should know the answer to that but we non-vegetarians do love meat pies and steak on the Barbie.

Muffin-Top Madness.
Life has advanced somewhat since the early days yet many current lifestyles have been adapted from past experiences. With many people becoming overweight, health experts are calling for health-slimmers to adopt the lesser known Victorian diet used by our 19th century forebearers. The mid-Victorian era between the years of 1850 and 1872 was a golden age of nutrition. People living in this age were more healthy, with stronger immune systems despite eating up to 5,000 calories a day. Researchers credit the good health on a vegetable-rich diet and consumption of wholemeal bread. This contained yeast which boosted the immune system while drinking less-intoxicating alcohol and avoiding sugar merely added to their success.

A return to the Victorian era meant more nutritional values. There was home cooking instead of processed food and emphasis on fruit and vegetables meant a healthier lifestyle. Their life expectancy then for women was 73 years and men 75. The elderly carried out strenuous work until the last days of their lives. Today, men and women might spend several years dependent on medical care before their life ends. Old age is not at all chronological but has more to do with when people are physically unable to continue with work.