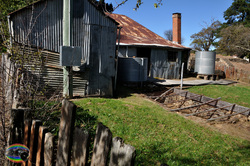 At Hill End I spotted six bouncing white bunny tails,
Their owners hopped on through the fence― unconcerned.
They passed by some burrows and dashed over bunny trails,
To fade away in the distance, like rabbits― unperturbed. 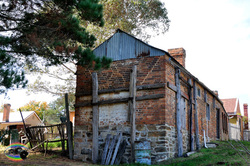 Some of the buildings have stood here for ages,
There's over a Century of tales to tell.
I could write a book of events to fill the pages,
How mining dwindled and population figures fell. 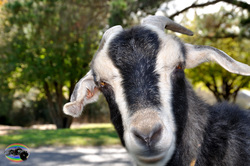 This wandering goat resembles a cousin of Toms,
That's what I relate to when peering into its eyes.
If it wasn't for a bristly face and fat stumpy horns,
You would agree their likeness is no surprise.
​ 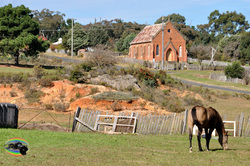 He's standin' in the paddock an' there's gold diggin's beyond,
In the distance is a church never seen by the unholy.
And when the sky blackens until a new day has dawned,
Nothing stirs but a campfire smoke trail drifting slowly. 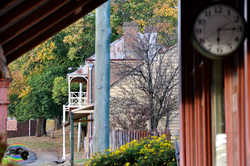 Eight thousand residents and fifty two pubs,
Seemed like business at Hill End was booming.
Clock stops at a quarter-six and everyone leaves,
'twas a ghost town― that very, next, morning. 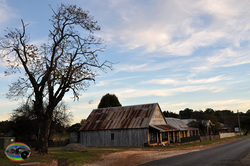 I found an establishment with high roof and detail,
Sneaked a timid peek behind the door of this store.
Inside, a hollow room, a projector saddled to the rail,
Screening a film of yore― donation box on the floor. 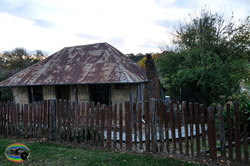 They'd often fan out and twist so they didn't look too straight,
Picket fences strung with nails and twistings of wire.
Such feeble fences fell when 'lolly legs' missed the gate,
I'd make a few bob as Hill-End-handyman for hire. 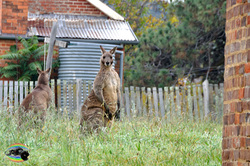 Bein' short o' residents means the bush crowd hops to town,
On first light kangaroos graze about in different places.
Interrupt their grazin' an' the reds'll knock you down,
With a left hook they'll bump you to blazes. 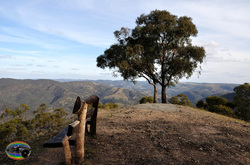 From Kissing Point Lookout you can peer across,
You can see the bridle track snake way down below.
The view is spectacular– it dazzles the eyes,
Where mining folk searching gold often go. 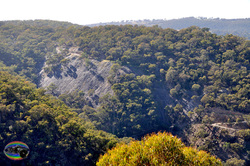 Beaufoy Merlin took a photo in the eighteen fifties,
While standing at a lookout which bears his name.
His picture showed huts and Hawkins Hill mines,
Of a landscape which has stayed much the same.