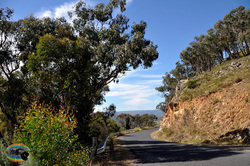 The road to Sofala is narrow with bends and curves,
You're mostly riding on a stretch of narrow road.
No-one else in sight is enough to rattle one's nerves,
The only carriageway― 'the Hill End frog an' toad.' 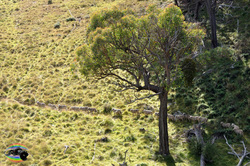 To the far side of a grass valley there was movement,
They were counted single file, first by threes, then by twos.
So well camouflaged it's hard to see just where they went,
A trail of lambs and rams and the wethers and the ewes. 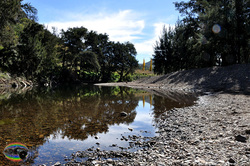 A bridge welcomes travellers to Wallaby Rocks, up-river,
The bridge was built over a bend of the Turon ahead.
Hug a tree and you'll get an idea of just how things were,
'You're surrounded by history y'know;' a Sofala-resident said. 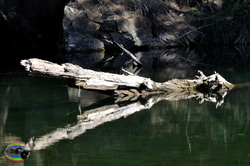 I peered above to Wallaby rocks, on a break along the track,
I yelled with exhilaration over such clear and inviting water.
There was hardly a sound or ripple― a voice came echoing back,
'You shoulda visited the Turon a hundred-an'-fifty years earlier!'
​ 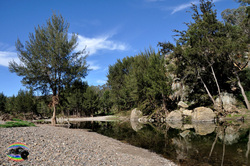 No ticket rides on ferris wheels, just a fabulous day,
Waterbirds are making haste to dart above the rock pool.
Cascading water empties, over a rock wall― then away.
We've almost reached Sofala― so take a deep breath and drool! 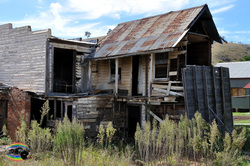 Buildings in Sofala need some ongoing restor-ation,
Visitors who stopped to stay and re-build would have found.
There are two councils that clash over any monetary situation,
Angry residents fighting by-laws, with both hands tied and bound. 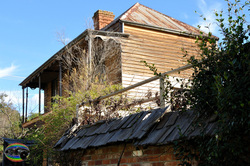 There's a similar style of cottage to be seen here today,
In the 1850s houses of 'wattle and daub' were formed.
Walls of interwoven wattle rods, sealed with mud or clay,
Roofs were layered with bark or sometimes iron corrugated. 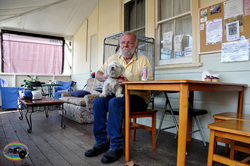 When you're feeling hungry after being on the go,
It's in Bowen Street Sofala – that's the homely Panners inn.
When the sun is warming you can have a feed alfresco,
Or go inside, step back in time― if you're keen to dine within. 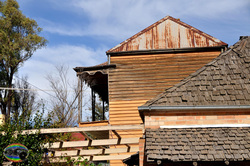 Cottages had rusted iron roofing if not layered with shingles,
They seemed to remain the same, as they have always been.
Some cottages had bare dirt and some with timber plank floors,
Amazingly, the residents' clothes were always pressed and clean. 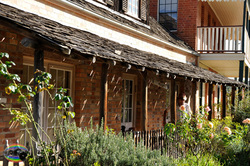 Some people who have been there a decade or more,
Are able to repair what's in need of replacing.
One Danish swaggie rescued an old cottage to restore,
'Camp Hobo' he carved on a sign― proudly hanging.
GOING HOME